Why I couldn’t practice yoga until this happened I remember the first time I practiced yoga.

I was 6 years old. I think I had heard my Mom wake up and her stirring in the living room, which called me there — after all, we lived in a small apartment and sound travelled easily.

It had to have been just before 6 in the morning. My mom was rolling out her mat, and sitting there, waiting to turn on the 6 am class and follow along as she welcomed the sun.

I remember asking her if I could join.

She pulled out her second mat and laid it down beside her.

“Only try it if you feel comfortable. Don’t push yourself to do anything you can’t do, okay?”

I was so excited. I remember hurriedly nodding my head, and sitting down cross-legged beside her.

6:00 am hit, and soft music filled our tiny little apartment, and following our breath, we welcomed the sun.

Morning yoga with my mom became a 6 am routine. She bought some yoga VHS tapes as well, so we could follow along to different asanas and learn more as we got better at the main ones. There wasn’t much teaching that happened on those tapes though — the instructors taught what was becoming the fast commodification and commercialization of the yoga practice, but the ones she found were one of the lesser cringe ones on the market.

Once the guided class was over, my Mom and I would stay lying on the mat, in savasana, and our quiet apartment would fill with the sounds of our synchronized inhale, then exhale. She would remind me that yoga, above all, is about the breath. And when my Dad would ask us later on in the day how our exercise went, she would vehemently remind him that just because it was taught as an exercise in this country, this was a traditional practice of grounding ourselves.

Our routine went on until I was about 9 years old. The practise of yoga asanas was something that was a sacred part of my favourite mornings. Some days, my sister would come and join in too — the first one up always got the better mat.

By 10, we were moving out of our tiny 2-bedroom apartment, and into our very first home — a little townhouse on the edge of Mississauga & Brampton. I started a new school — signed up for things like track & field and student politics, and the haven that was our morning routine, for me at least, was lost.

Growing up, I bore witness to the mass commercialization and commodification of yoga. What was a sacred traditional form of healing was an exercise to my university peers, squeezed into 30-minute sessions between classes. Everywhere I looked, the western idea of yoga continued to be taught by folks outside of the culture who had the privilege of affording to learn in the ways that were accepted here.

I couldn’t practice yoga in any of these forms. Friends tried taking me to classes and convincing me to come, but there was inherently something so painful about sitting in a classroom with folks who I knew didn’t honour it the way it’s meant to be. 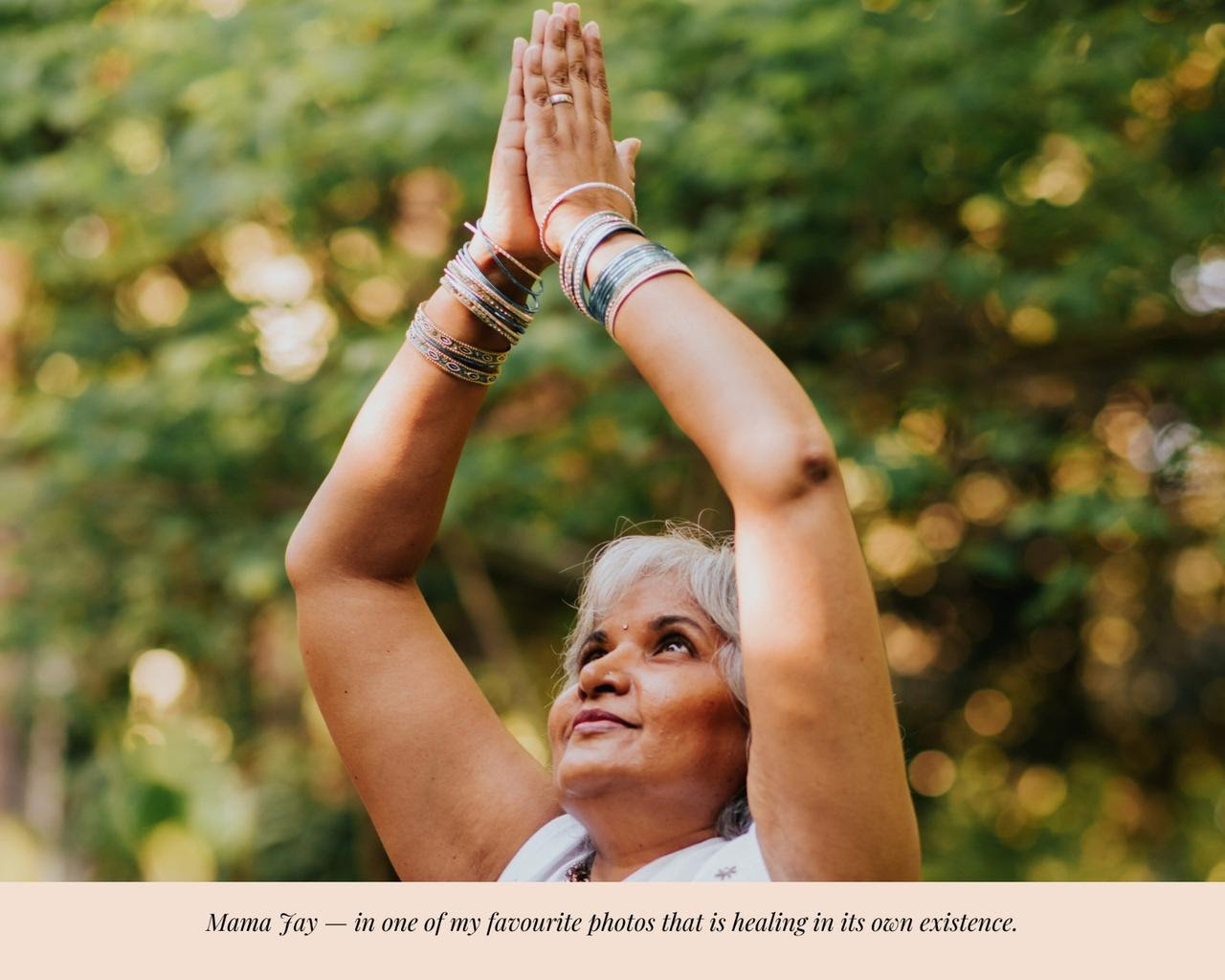 Which is why I was so excited when my Mom offered to teach me. She’s been on her own journey in the last few years — rediscovering herself — and a part of it has been the continuation of this lifelong practice. In August, she’ll officially be an internationally certified yoga teacher, having learned from the best at the oldest Yoga Institute in the world — straight from Mumbai. My classes with her are now scheduled 3 times a week over zoom.

Throughout this, I am realizing how deep my own unlearning needs to be. I am reading articles like this one that truly explain how deep the western appropriation of yoga goes, and the ways in which it is inherently harmful — something my instinct has been telling me in the last few years.

And through it, I am finding healing in what it means to be back — metaphorically on most days — by my mother’s side. Learning from her the deeper and ancestral history behind the practice that has been in my bloodline for generations. Crossing the line of the third culture that I forever straddle and diving deep into simply culture, because in these moments it is simpler.

In another way, it’s also teaching me the lessons that I need in navigating the world of COVID, entrepreneurship, and advocacy.

That sometimes we must do everything we can — practice the duties we have to ourselves, and the greater duties we have for the world — and then let go, and things will happen as they do.

So these are my daily reminders.

One long inhale,
And exhale,
At a time.